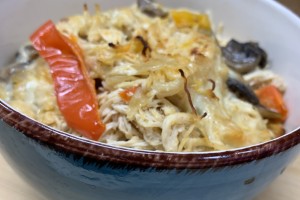 Ingredients for 8 to 12 servings

In a large skillet on medium high heat add the butter, bell peppers, onion, mushrooms and a teaspoon or two of the fajita packet. Cook until the veggies are starting to brown and soften. Remove from heat.
In a slow cooker add the chicken breasts, cooked veggies, the remainder of the fajita packet and broth. Cover and cook on low for 4-6 hours. When chicken reaches 165° degrees and is fork tender, remove the chicken only from the crock pot and place in a large bowl and shred the chicken. Place the shredded chicken in the bottom of a large baking pan, then scoop out veggies from slow cooker. Add up to 1 cup of cooking liquids back to the chicken. Top the chicken with the slices of Pepper Jack cheese and broil until the cheese melts.
Instant Pot: Use the sauté method to cook the veggies. Add the chicken, fajita packet, and broth. Seal the pressure cooker, close the vent and cook on high pressure for 15 minutes. Allow to naturally release. Continue with instructions listed above.